When Ruhollah Khomeini, while visiting Iraq met with Muhsin Al-Hakim, he urged him to take action against the Baath regime who has just arrived to power in 1968. Al-Hakim is said to have replied: “If we took drastic measures people would not follow us. The people lie and follow their whims, they are in pursuit of their world desires”.

Here you have it, the ultimate difference between the old order and the new, between the aristocratic wisdom of Al Hakim and the genius intellect of Khomeini: using the new institutional and organisational technology to turn “people” into an “active”, useful political force. Ultimately, this required the reinvention of what is meant by “the people”. There were other known changes that separated the old order from the new. First as Marx would argue, there are the capitalist modes of production which leads to unbridled capital accumulation and acquisitiveness, and what comes with it in terms of social change and large-scale economic extractive systems. There is also following from the first, the formation of the modern state with its rule of law, bureaucracies, policing system and disciplining institutions that Weber, Foucault and others have explained in great details. But one  overlooked visionary of “modernity” is Nietzsche, who saw the change located more specifically in our vision of “the human condition” or the relation between social classes. Nietzsche is prophetic as he could foresee the left and right side of the political spectrum, belonged to the same tradition triggered by the age of enlightenment but also as a remnant of a Christian morality turned into populism. 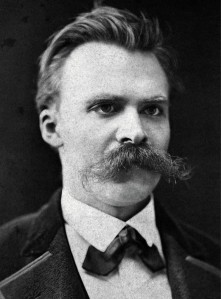 Nietzsche’s warning is that this discourse of human rights, socialism, nationalism, equality, all this stuff that reinvented our notion of “the people” had very dangerous implications. The theorist of “the will to power” was ironically the earliest to be wary of modernity’s potential to abuse power and lead states to useless wars. His critique of democracy was very much along the line of Plato’s and based an elitist view of the different capabilities of humans to develop political skills.

In this sense, Nietzsche was the last anti-mass-politics anti-populist thinker, the last of the old order (which stretched back to the Greeks and before). Al-Hakim’s quote mentioned above is revealing in the way that he thought through a pre-modern understanding of the human condition. That is not too surprising given that he belonged to an uninterrupted lineage of a class of people, Shi’i clerics, who went back almost a millennium. In this old order, humans were comfortable with the idea that equality doesn’t mean anything and does not exist in reality. If anything, equality is a dangerous reality. As al-Hassan (the son of Ali bin Abi Taleb) is reported to have said in a cryptic way: “if all men were equal the world would have been destroyed”. Equality is not to be confused with Justice, which is the foundation of conceptions of the-living-together in the older order. Ironically, today justice is conceived as a stripped down version of the old notion, as “fairness”, to echo Rawls.

Equality here is problematic because it involves an idea that we want to impose to an otherwise different reality. In reality, people have different capabilities, do different things and develop different skills. They also have different types of wealth, control different types of resources, all this relating to family, geography, history etc. Equality involves building a system that forces everyone to potentially receive the same kind of treatment. This involves erecting a while series institutions and technologies with unbridled power which although keeps the ideal of equality alive, in reality produce oligarchical systems in which influence and control of people and resources are in the hands of the few. Another difference in reality is that in the modern era the human condition is understood through a system of rights rather than through a system of duties and development of skills or ethics. The older order that was based mostly on this paradigm was rejected because of the power abuses that ensued from it. But the new system is presenting unprecedented power abuses that are for the time being unaddressed.

This tiny chunk of land that came to be called Lebanon is entering in full force its circus legislative elections. It is highly re-assuring to see that indeed the Lebanese advertising culture is now using its long-worked on branding concepts for the benefit of the various political factions. But from the Lebanese Forces who play it dirty or the Kataeb and Tayyar doing word games, I have to say that the ones that impressed me the most, that puzzled me to the extent of fascination is the Mustaqbal’s party campaign.

Mustaqbal decided to propose certain philosophical reflections, on the concept of.. well, the future. For example one billboard says “the present is a time that only exist in the future”. I have to say this one made me think for a while. It may be that someone in the marketing team read Bergson’s theory of time, and it may well be that he just came up with that intuitively. To that I would retort quoting Edmond Jabes (and I may come up with that on my own) that “the future is the past that comes”.

There are many different linguistic twists that these billboards carry. Very interesting yet disputed statements such as: “the future is where you spend the rest of your life”. But by far my favorite one is: “They asked the time, “where to?”, he answered: “I’m going to meet my future”. Priceless.

Understandably one should focus on his future so as to work and make a better life. Thus: “For every person who has ambitions, the door of the future is open”. Or this one: “It is nice to have history behind you, but it is even better to have a future”.

But I have this urge to tell Mustaqbal dudes that their fixation with the international tribunal, with the death of Hariri, with their martyrology culture they have been promoting in competition with Hizbullah is a regressive obsession with the past blowing up all their ‘philosophical’ reflections on the future as the driving force of political, social and economic change.

And with that I would end with another beautiful statement by Edmond Jabes: “Death is the past that persists” (La mort c’est le passé qui persiste).