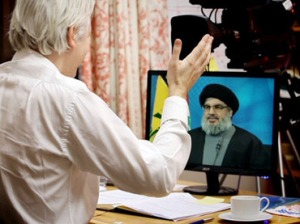 There are several points to remember from Hizbullah Secretary General Sayyed Hassan Nasrallah’s televised interview conducted by Wikileaker Julian Assange two days ago. Though as it was geared to a Western audience, most of what was said was already known by the local population from Nasrallah’s various televised speeches in Beirut, there is, I think, a very important point that Nasrallah made when Assange asked him how, when, and in what circumstances would the conflict with Israel end.

For the first time, to my knowledge, an official from Hizbullah (and not any official), formally acknowledged that “the only solution to the Israeli-Palestinian conflict is establishing a democratic state on Palestinian land where Muslims, Jews and Christians live in peace”.

Now that’s quite something, rhetorically and substantially. It gives a bit of perspective to this fashionable notion that Arabs have commercialized, namely that “Israel should cease to exist”. I’ve already offered a specific reading of this claim and though I am not sure Nasrallah read my post before making his statement, what he says does read the same way.

That in a way should be more alarming to the average Israeli than the more literal take on the claim that states that Jews should be thrown to the sea. More alarming, because it is realizable through diligence and perseverance that started almost 30 years ago…